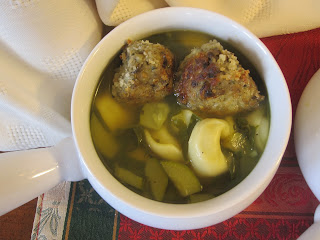 I always like the idea of having soup as the main course for big holiday meals. This makes a huge pot of soup and most of the cook time is down time, which gives you the chance to prepare other parts of meal rather than spending too much time perfecting the main dish. It just so happens that today is soup Wednesday also, so I thought this would be a nice addition to the holiday meal I was planning. 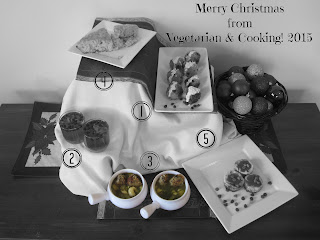 Recipe from Joanne Eats Well With Others.

First, start the soup. In the bowl of a food processor, combine the onion, carrot, garlic, and basil. Pulse until it forms a smooth paste, called a pestata.

Heat the olive oil in a large soup pot over high heat and scrape the pestata into the pot. Cook, stirring until the pestata has released liquid and started to dry out a bit, about 5 minutes. Pour the cold water into the pot, scraping up the pestata from the bottom of the pan. Bring to a boil. Lower the heat and simmer the broth, covered, for about 15 minutes. Stir in the greens, zucchini, and salt. Return to a simmer and cook, covered, for 25 minutes, and uncovered for 20 minutes. Add the tortellini in the last 10 minutes of cooking.
While the soup simmers, prepare the veggie balls. Cut the eggplant into 1-inch cubes. Bring 2 quarts of water with 1 tbsp of salt mixed in to a boil over high heat. Add the eggplant and boil, uncovered, for 10 minutes, or until eggplant is cooked, pressing them down into the water regularly. Drain in a colander and push out as much water from them as you can using the back of a spoon. Finely chop eggplant.
In a bowl, combine the eggplant, 1 cup of panko, cheese, parsley, and garlic. Season to taste with salt and black pepper. Mix in the egg. Roll the eggplant mixture into small balls that are about 1-inch in diameter and set them on a platter. Put the remaining panko in a small bowl and roll each ball in the breadcrumbs to coat evenly. Set the coated balls on a clean tray.
Pour the olive oil into a 10-inch skillet to a depth of ½ inch. Turn the heat to medium and when the oil begins to shimmer, put a test ball in the skillet. If it sizzles immediately, then the oil is hot enough. When the oil is ready, carefully put the balls in the skillet in a single layer.
Fry, turning gently with a spoon, until browned all over, about 3 minutes total. Remove with a slotted spoon to a paper towel-lined plate and sprinkle with salt. Repeat with the remaining balls until all of them have been cooked. 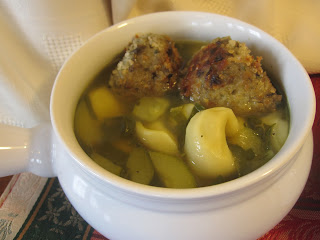 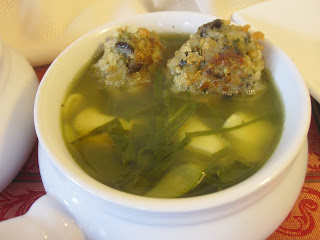 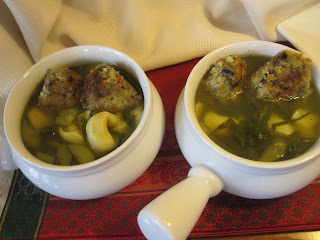 This soup easily made 8-10 servings which is great if you're serving a crowd. I thought the eggplant veggie balls were the best part of the soup, they really helped to add another layer of flavor. I think this was a wonderful vegetarian take on a classic dish that usually includes meat. Just make sure to check the seasoning, the soup can be bland if there's not enough salt to bring out the flavors.