Parsnip Latkes with Horseradish and Dill 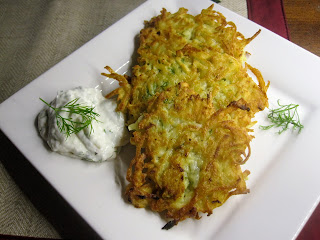 Every month BuzzFeed publishes a list of seasonal recipes to try for a particular month. I found this recipe from Smitten Kitchen in the 31 Super Comforting Recipes to Try in December.


We make latkes occasionally and the idea of adding another seasonal vegetable to the mix was intriguing. Dave and I thought there was a slight pepperiness in the latkes from the addition of the parsnips. Parsnips are also a good source Vitamin C, so sneaking this vegetable into latkes may be a way to get picky eaters on board with parsnips.

The dill wasn't very noticeable in the latkes themselves, but appreciable in the sour cream sauce. If you don't like horseradish, leave it out, but the sharp flavor is a nice complement to the dish overall.

Peel the potatoes and parsnips and grate them on the large holes of a box grater. Since the potatoes will create a wet mixture which is not ideal for frying, transfer shredded vegetables to a lint-free dishtowel or square of cheesecloth, and wring out as much liquid as possible. Let stand for a few minutes, then wring again. Eliminating as much wetness as possible will allow you to create crisp, light latkes.

Heat a large skillet over medium heat. Once the skillet is hot, add 3 tablespoons of oil and wait until it is heated through before frying the latkes.

Using a 1/4 measuring cup scoop little mounds of batter into the heats skillet. Once the latke is golden underneath, after 3 to 4 minutes, flip the latke to cook the other size until also golden. Repeat with the remaining batter (we made about 12 latkes of that size)

While the latkes are cooking mix together all of the sauce ingredients in a small bowl.

Serve the warm latkes with the horseradish and dill sour cream. 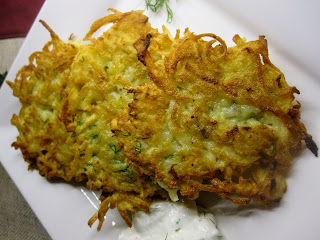 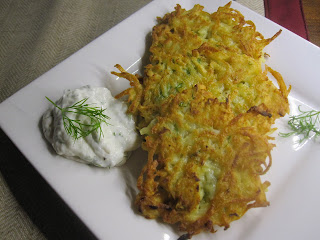 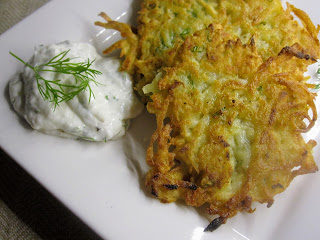