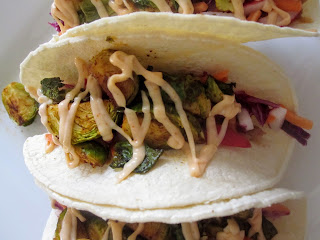 I never had brussels sprouts before I started dating Dave, because one of my parents doesn't like them, so I had no reason to seek them out on my own. Now that I've had them I'm obsessed, roasted brussels sprouts are the perfect amount of savory and caramelized and they go great with so many other ingredients.

I've been an avid Oh My Veggie reader for years, so when I saw this recipe I thought why not? We had never tried to put brussels into a taco before, and like with most of their recipes this one was straightforward and easy to follow.

While we enjoyed this recipe, we ended up thinking it was just okay. I personally hate corn tortillas, there is a restaurant near us that makes fantastic ones that can hold up to any taco filling. It just seems that whenever I purchase my own it always ends up falling apart and you can see that start to happen in these photos. Dave liked the combination of the brussels sprouts with the sriracha aioli. It's something I might make again with a few tweaks, maybe an even spicier sauce, better tortillas, different veggies.

Preheat the oven to 400°F and trim the brussels sprouts. I usually remove the more beat up outer leaves, chop off the stems, and then cut them in half. Lay-out the brussels sprouts on a single layer and then toss with oil and sprinkle with salt. Roast in the oven for 15-20 minutes, until light golden brown.

While the brussels sprouts are roasting, make a slaw out of the cabbage and carrots. Combine the red cabbage, carrots, apple cider vinegar, and salt. Toss to combine and set aside.

In a small bowl combine the miracle whip, sriracha (to taste, add more if you want more of a kick), and the lime juice. Stir until combined and smooth.

Heat the refried beans on the stove, and add more seasonings if they seem bland

Spread the refriend beans on top of the warm tortillas, top with the cabbage/carrot slaw, finish with the roasted brussels sprouts. The sriracha aoili with top everything off. 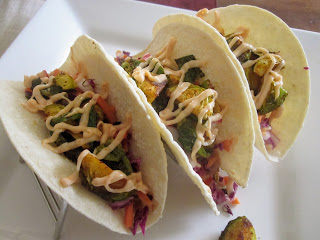 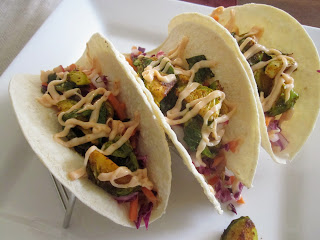