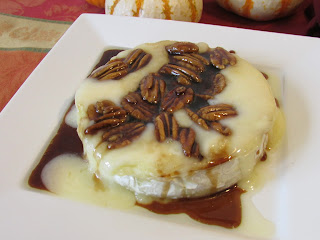 Welcome to the first post of the Thanksgiving series for 2014. This is the second year that I created an entire meal and photographed everything at once. I could not have done any of this without Dave's help -- he was the genius behind the tablescape and second set of hands in the kitchen. 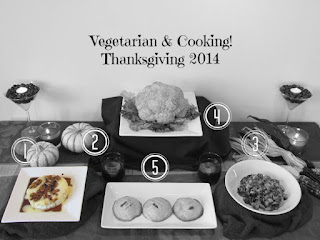 This meal starts out with a decadent dessert of baked brie coated in a delicious Kalhua based sauce. This appetizer didn't take too much work and was very easy to make. Since the main course was cooking in our oven, I baked the brie in our toaster oven. You could do both together, but it would be easiest if you were doing both in separate ovens.
Recipe from Noble Pig.

Preheat oven to 350 degrees.  Start by carefully slicing around the rind off the top of the brie wheel, but do not remove completely.  Bake for 15 minutes.  When the Brie is done baking, the top can be easily removed to expose the creamy cheese inside.

While the Brie is baking, in a medium saucepan, bring Kahlua and brown sugar to a boil and simmer for 10 minutes, until syrupy.  Throw the pecans in for 2 minutes at the end to warm them through and completely cover with the sauce.

Pour Kahlua sauce over the brie and serve warm. 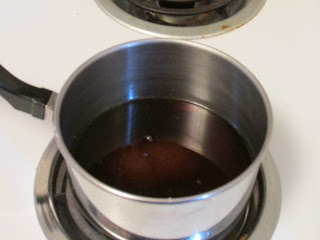 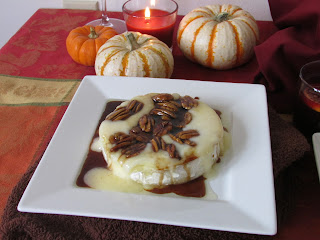 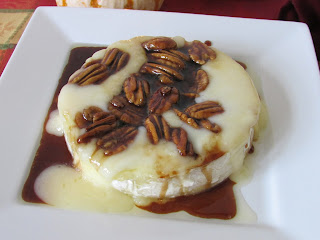 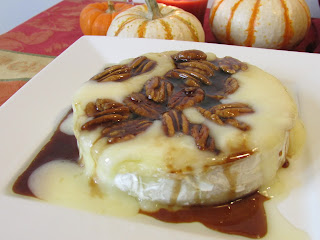 This baked brie was heavenly. The cheese was a wonderful and gooey consistency. The Kalhua brown sugar sauce added the right amount of sweetness while the Kalhua added a light coffee bitterness. And the pecans added a nice crunch. We served this with some Ritz crackers. This was the one recipe we had no leftovers from, Dave and I polished off the entire wheel of brie.