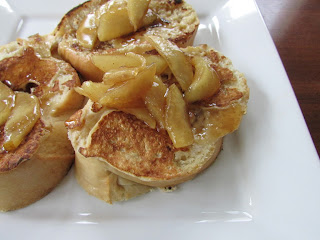 I made this recipe for Dave's birthday, it was a little more dessert than brunch, but it is a great recipe for a special occasion. This recipe is incredibly rich, but easy to make. It would have been amazing served with mimosas.

Add apple slices, brown sugar, and butter in a medium sauce pan. Cook over medium high heat until the brown sugar has dissolved and butter has melted. Add the vanilla and cinnamon and reduce heat to simmer. Cook for 6-8 minutes. Remove from heat and allow to cool slightly while you prepare the French toast.


In a large bowl whisk together eggs, vanilla, milk, and cinnamon. Stir in flour and whisk until smooth. Coat both sides of a piece of bread, cook the bread in a large pan over medium heat 1-2 minutes until lightly browned, then flip and cook other side 1-2 minutes. Repeat with remaining bread slices. Top the toast with the apple-caramel sauce and enjoy. 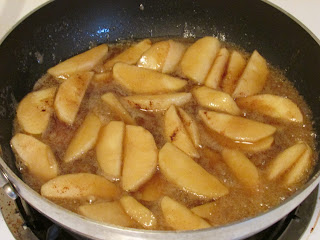 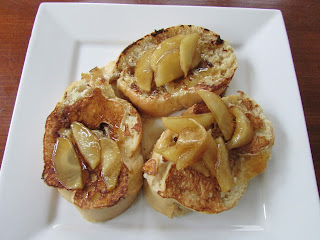 The sauce on this was the best part. The apples were incredibly tender and the sauce that they were in was a really nice caramel sauce. This is something that I will be making again for another special occasion, maybe the day after Thanksgiving or Christmas.