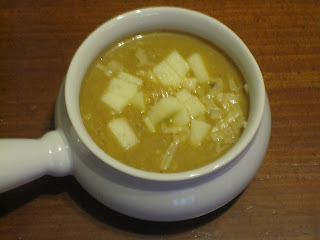 During our mission to use the half bushel of apples that we picked several weekends ago, I wanted to do a mix of sweet and savory recipes. We had this soup for dinner, but it would be best served with something else like a grilled cheese in order to make it a more fulfilling dinner.


Toss the apples in the oil, salt and pepper and roast in a preheated 400 degree oven until lightly golden brown, about 20-30 minutes.

In a large pot heat the oil over medium heat then add the onion and saute until tender, about 5-7 minutes. Add the garlic and thyme and cook about a minute. Add the apples, broth and cider, bring to a boil, reduce the heat and simmer for 15 minutes.

Remove from the heat. Mix in the milk, cheese and mustard, let the cheese melt and season with salt and pepper to taste. Puree the soup with an immersion blender. 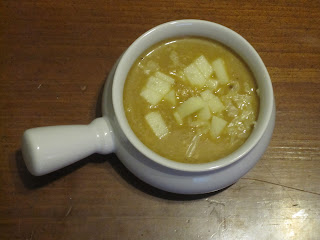 I think Dave enjoyed this soup a little more than I did. The soup had a subtle sweetness to it, but it is mainly savory. It was something that I enjoyed, but I don't know if it's something that I would make again.