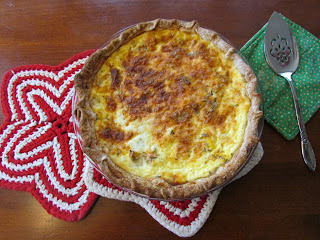 This is not your typical quiche, instead of an egg, cheese and veggie dish, this one has fruit, namely those apples you have sitting in your fridge or cupboard. The real intrigue of this dish comes with the apple and cheddar cheese combination, which I understand to be divisive, some people "get" it, others don't.

Peel and core the apples, and slice them into 1/4 inch slivers. Simmer the slivers in apple cider in the frying pan. I used firm, tart apples and cooked them long enough for the apple slivers to soften and the apple cider to reduce to a small amount.

Allow the preformed pie crust to warm up until pliable and unroll it into a pie dish, lightly coated with cooking spray. Spread the apples with cider reduction onto the crust layer.

Shred the cheese and mix it in a bowl with the eggs, milk, and finely chopped rosemary. Pour the egg mixture into the pie dish and fold the crust edge, dimpling around. It is also best if you have some extra shredded cheese that you can sprinkle over the top.

Bake this at 375 for 40 minutes, but be sure to check it five minutes before and after because you want the top to be nice and brown and the crust as well as the insides to be cooked throughout without burning the crust edge. 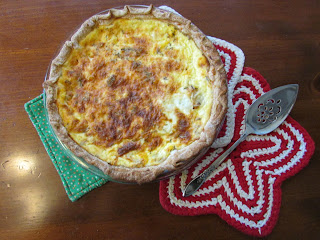 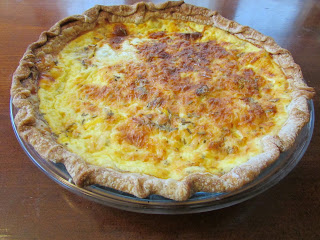 I have to return to the earlier notion that this quiche would be divisive, only it was the apple and egg pairing which troubled me some. It was hearty and flavorful, I ate most of it and Alecia had a few slices, too, but I wasn't too sure we jived, myself and the quiche. Worth modifying - the source recipe used bacon, so conceivably it could use a smoky or another salty element, give it a try.