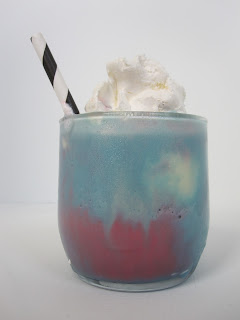 This recipe didn't turn out 100% the way I wanted it to, but it was pretty tasty and easy to make. The idea was that the colors would sit on top of each other in clear layers, but the milkshake mixture was already pretty soft due to my use of frozen yogurt instead of ice cream. I don't feel too bad though, because the blogger I got the idea from had some similar issues.

Pour into glasses, although they won't layer, they'll swirl together. Top with the remaining undyed milkshake and serve topped with whipped cream. 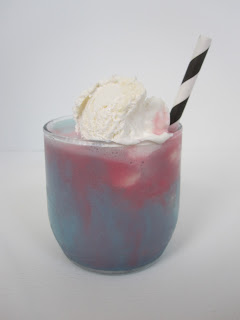 These were milkshakes so they were of course very tasty. The swirled effect was cool, I'm a little disappointed that the layering didn't work out, but overall I was still pretty happy to have a milkshake.