Homemade Pasta with Zucchini in an Herb Sauce


Thanks for the 300+ views over the last six months! This blog has been really fun to work on and I'm constantly searching for new recipes to try, hopefully every month I'll be able to increase my posting at least a little more than the month before.

Now on to the homemade pasta... 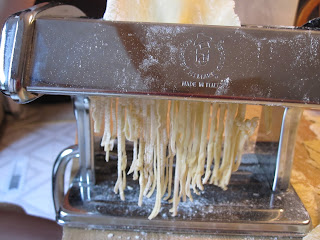 The pasta recipe is a family recipe of my roommate's. According to Becky you add all ingredients in equal parts one egg per cup of flour and a proportional amount of water. We made a lot of pasta (she said you can freeze some for later) so we used five eggs and five cups of flour and five measurements of water.


Now you can proceed one of two ways -- if you don't have a pasta maker roll the dough as thin as you can and slice into thin strips with a pizza cutter (fettuccine anyone?) make sure to continue to use flour on the work surface and on the pizza cutter. If you have a pasta maker or a pasta attachment for your stand mixer follow the steps below.


Cook as much pasta as you need for your meal in a large pot of salted boiling water.

Meanwhile make some sauce -- you can add any sauce to your pasta marinara, alfredo, etc. We had herbs left over from making fondue last week so we decided to make an oil and herb sauce. 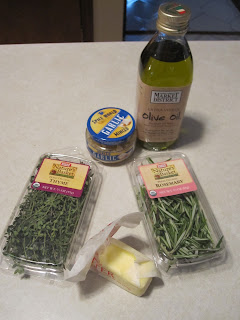 I didn't use specific amounts of any ingredient in this recipe, I pretty much eyeballed it -- I used about 3/4 of a cup of oil, three table spoons of butter, three cloves of garlic and two sprigs of each herb finely chopped.

Once the pasta is finished (it won't take long, not nearly as long as boxed pasta, just a few minutes). Then I removed the skillet with the butter, garlic and zucchini mixture from the heat -- add the pasta and oil/herb mixture and toss. 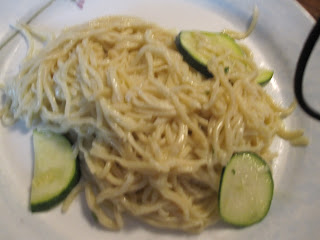 Homemade pasta is so worth the time and effort! I encourage everyone to try making pasta at least once and to experiment with different sauces. It would also be possible to infuse the herbs into the pasta dough, rather than including it in the sauce. You could also include any variety of vegetables in the dish.