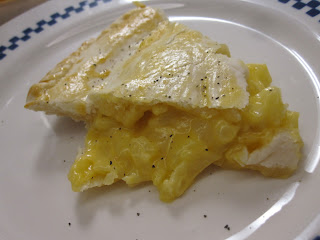 Wow 600 views! Thanks for the support.


The staple of my diet while in England was cheese pie a delightful English classic which is served a variety of ways. This recipe comes from the BBC and this will be the first of many pie recipes on this blog because aside from this pie I'd love to recreate a mashed potato pie as well as the goat cheese and red pepper pie I had in London.

The BBC recipe calls for homemade pie crust, but after a bad experience with making pie crust in high school home ec. class I tend to shy away from making my own -- I'll use store bought crust, if you're like me and don't like to make pastry add one package of pie crust to your list.

Preheat oven to 350 degrees and bring two pots of water to a boil.

Press the pie crust into a pie tin and place in the oven for ten minutes. The instructions call for adding something heavy (such as baking beans) to the pie so the crust won't rise, I didn't have those so I just pushed the risen crust back down after I removed the pan from the oven. 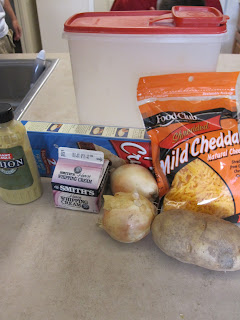 Drain the potatoes and set aside. Drain the onions and return to the pot.

Beat an egg in a bowl.


My boyfriend declared this "the best thing" that I've made. This is a great vegetarian main dish and I'm looking forward to making this recipe again and trying to create some variations.