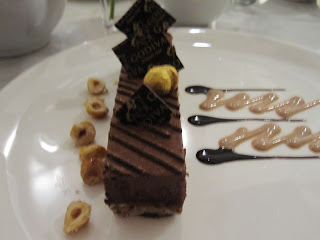 Sorry that I haven't posted in over a week! As I mentioned in my last blog I was on vacation in England and did a lovely tour of Northern England and then spent some time in London.

Here is a photo blog of all the food (almost all the food) that I ate while in England -- if you've ever heard that English food is tasteless, that claim is completely off base.

This meal was delicious! The mashed potato pie is one of the recipes I would like to recreate for this blog. I wasn't a fan of the carrots, but the leek and potato soup I started my meal with (sorry, no picture) was equally flavorful and delicious.

The first dinner we had was a homemade mushroom risotto with a summer pudding for dessert -- I'm not sure I can convince my boyfriend and his roommates to eat mushrooms, but another risotto recipe may be a future endeavor for me to try for this blog. We also had some crostinis as an appetizer -- the watercress pesto crostini was our favorite.

The pizza pictured is one of their Leggara pizzas which is a 500 calorie pizza because as you can see the center has been cut out and filled with greens. This particular pizza was called the Padana and was topped with goat cheese, spinach, red as well as carmalized onions. Delicious! I wish we had Pizza Express in America, this is another one that I would love to recreate.


It's a red pepper stuffed with zucchini and brie served with a trio of salads (pasta salad, cole slaw, salad of greens) and a jacket potato, aka a baked potato. You know when you order a meal in a restaurant that sounds really good but isn't? That was this meal, it's not that there was anything wrong with it, I personally just didn't enjoy it.

It's a banoffee pie -- it looked so good, but sadly I hate bananas.


Although I don't consider the meal to be vegetarian, there are a lot of people who do eat fish on a vegetarian diet. My roommate thought the fish was great, nice and crispy. I enjoyed a side of "chips" which were very tasty with vinegar and a side of mushy peas, which my roommate who likes peas enjoyed, I don't really like peas.

A delicious combination of goat cheese and red peppers with mashed potatoes on the side. This is another recipe I'd like to recreate.

In case you haven't noticed -- I am obsessed with brie, I love brie and I loved this appetizer. 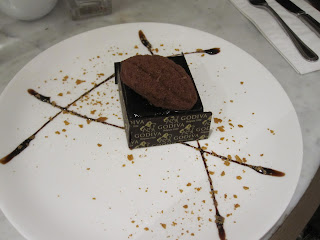 Both paired nicely with afternoon tea. 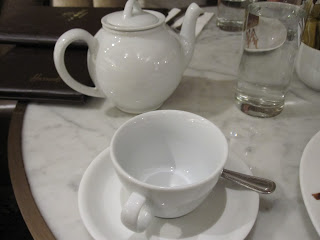 That evening we had a lovely barbecue and I enjoyed a roasted red pepper and zucchini sandwich with balsamic vinegar and fresh mozzarella paired with a cilantro lime potato salad.

The following day because we had to catch a train we picked up some lunch to-go from a stand
in Camden Market.

The Tortilla Espanola was also very good and would be simple to recreate -- the ingredients are tortillas, cheese, potatoes and eggs. Look for this one to make an appearance on the blog as well.

Our last dinner in England was another barbecue this time with vegetable and halloumi (a cheese which can be grilled) served with homemade garlic bread and a salad. Delcious! My vegetarian barbecuing has been changed forever after two nights of barbecuing in England. If I can purchase halloumi somewhere near here it will make an appearance on the blog.

I hope you enjoyed this post! I know seeing it isn't the same as eating it, but at least the pictures of delicious food might lure you to England. Look for some recipe posts in the next week.