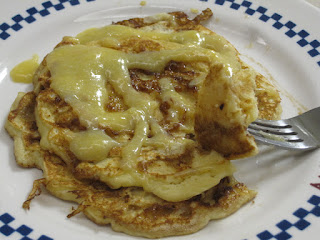 There are some changes coming to Vegetarian & Cooking! -- namely that Becky will start guest posting more often due to my class schedule this semester. I'm not sure how long this change will last, but it will be for at least a few months. If we love it, maybe we'll keep it throughout the summer, if we don't then we'll change back.

This is great because we have totally different tastes so there will be some really fun recipes coming through in the guest posts.  To learn more about this new posting schedule or to learn more about us, visit the Meet Alecia & Becky tab at the top of the page.

These pancakes were fantastic! Like cinnamon rolls though, these were super sweet, I will be making this recipe again, but I think it's best for special occasions. These were also a huge hit will cinnamon loving J.
If you're looking to make a special breakfast, this recipe is a great choice.