Dave and I just returned from a brief spring break trip to New York City. We spent about twelve hours in the city, so here's a little glimpse of the vegetarian options that we enjoyed in the city. There are so many amazing options in NYC and this is in no way representative of everything that there is to eat. We were staying outside the city with friends, so we only ate lunch and snacks in New York City.


Our foodie stop was Shake Shack. This was recommended to us by multiple people, they have several locations throughout the city and a kiosk in Grand Central.

Dave and I split the 'Shroom Burger with fries. The 'Shroom Burger is crispy fried portobello mushroom topped with tomato, lettuce, Munster cheese and the signature Shack Sauce. We both really enjoyed this burger -- Dave and I have eaten veggie burgers at various places and this was the first time that someone had served a fried portobello as the burger. It was great, thanks Shake Shack!


We split the burger, because it was necessary that we each get our own milkshake. I had the peanut butter (pictured here), Dave had a caramel. There are basic flavors, as well as a flavor of the month. At the location we tried the milkshake flavor of the month was yellow sponge cake and I'm sure that it is heavenly, because the peanut butter and caramel shakes were perfection in a cup. 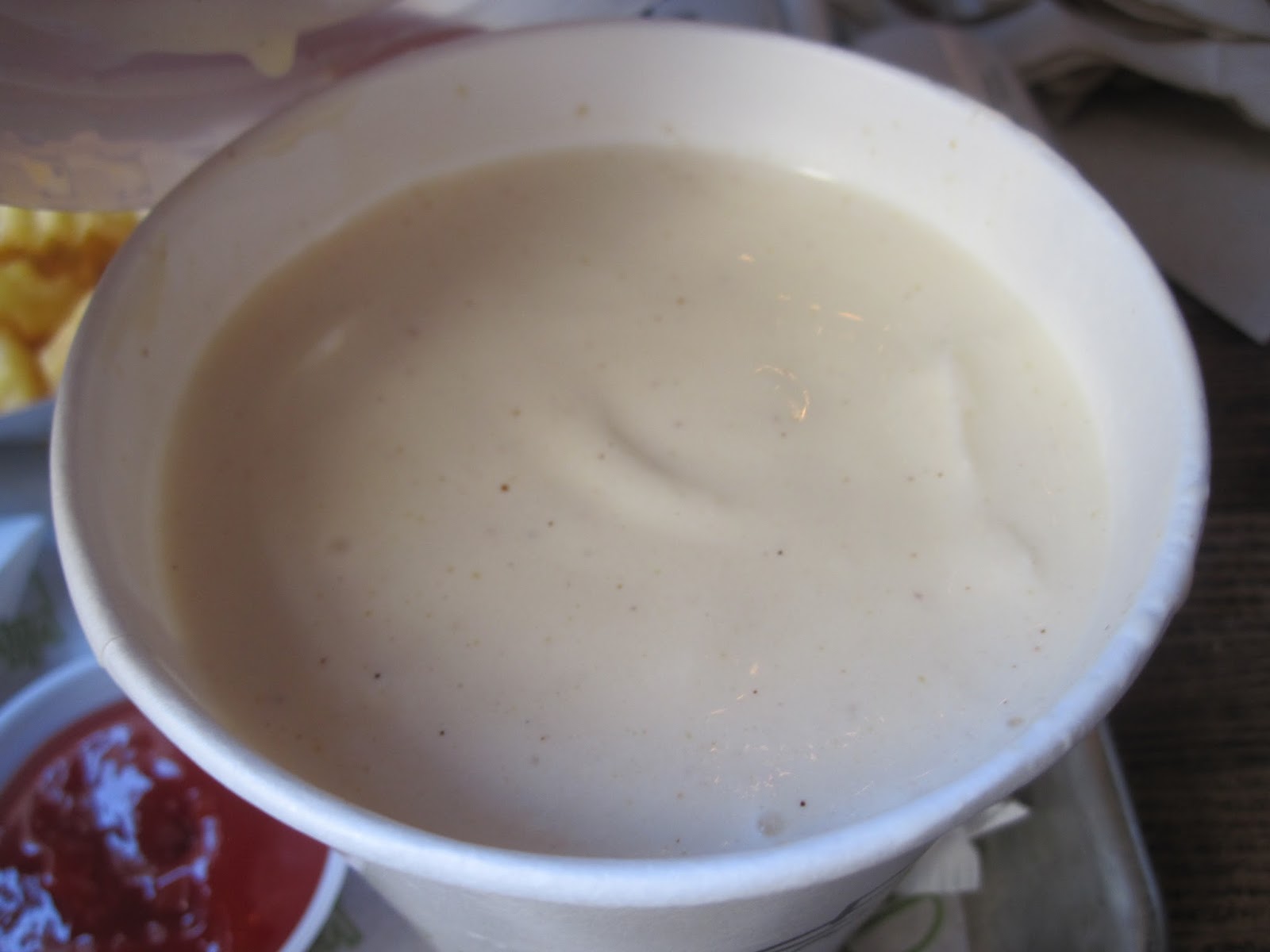 The second day we were in NYC, we spent a little time wandering around Grand Central station looking for a certain place which was recommended to us.

We stopped at Cafe Grumpy and enjoyed a Flat White, which is a mixture of microfoam and espresso. 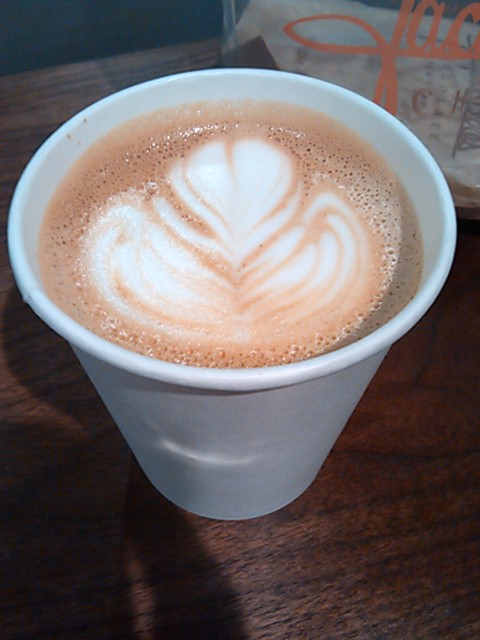 With the cookies we had picked up from the Jacques Torres Chocolate location also in Grand Central. These cookies are quite heavenly, the mixture of chocolates throughout the chewy cookies helps to add texture as well as additional flavor. We picked up a cookie for our hosts as well (they're pretty big, we probably should have split one) since they recommended Jacques Torres Chocolate to us. My friend Sara had sent me his chocolate chip cookie recipe a few years ago, which I attempted to recreate for you here at Vegetarian & Cooking! 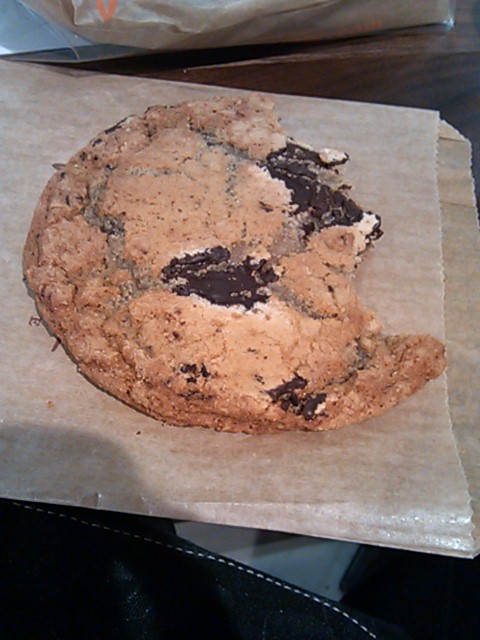 Dave was insistent that we pick up some falafel from a street cart (since we couldn't have the experience of trying the quintessential NYC hot dog from a street vendor). We enjoyed a falafel gyro near the Staten Island Ferry -- it consisted of falafel wrapped in pita with lettuce, tomato and yogurt sauce. The falafel was flavorful and this made for a nice early lunch. 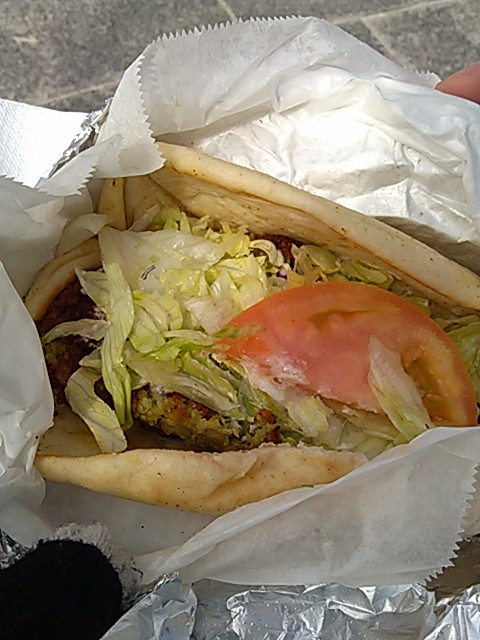 The last thing we tried was the iconic "slice" of pizza. We stopped at Little Italy Pizzeria on 43rd street. The restaurant claims to be world famous and the first of all of the Little Italy Pizzeria's in NYC (there are many). There are no seats. You order your slices at the counter and can either take them to go, or enjoy them standing up at the dining counter.

We each had a slice of cheese pizza, I really love pizza, I think that I could eat it every day. I was happy with the slice that I had. The New York style pizza has a very thin crust and this piece was nice and crispy on the bottom. The cheese was melted perfectly and the sauce had nice flavor. 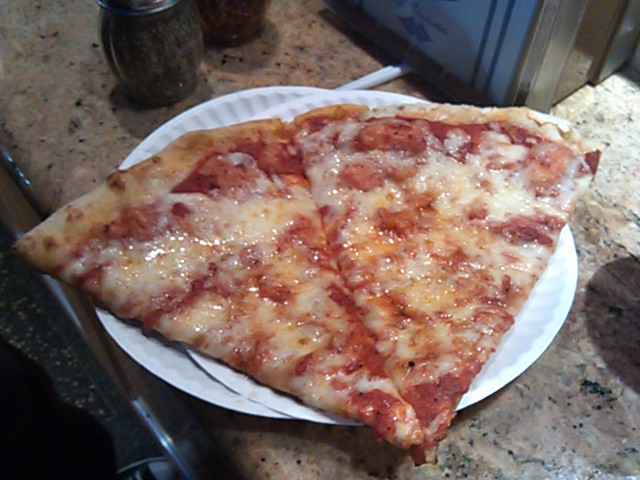 I think for this trip Shake Shack won out as the favorite place to eat for both of us. Getting a seat was a little crazy, because the location was so busy. I would recommend getting your food to go and sitting on a bench or finding a table in a park to eat at if you're going to visit Shake Shack.