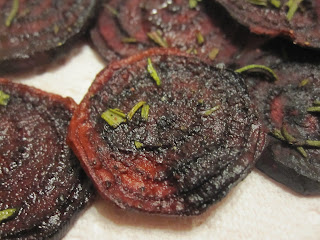 I don't recall eating beets too many times while growing up (I actually don't remember eating beets at all). After trying them for the first time in college, I realized that I loved the unique flavor and the color looks great in most recipes. This recipe is incredibly easy to make and has very few ingredients. Make sure not to discard your beet greens, Dave has a recipe for those which will be posted on Thursday.

Thinly slice beets with a mandolin (or a sharp knife), getting them as consistently thin as possible. It's best to do this with a mandolin, we don't have a great one, so I needed to resort to using a knife -- as a result some of my beet chips did not cook all the way through.

Lightly drizzle the beet slices with olive oil, sprinkle with a pinch of salt and the rosemary. Toss to coat, then arrange in a single layer, making sure the slices aren’t touching.

Bake for 15-20 minutes at 400 degrees or until crispy and slightly brown. If you need to cook them longer than 15 minutes, closely watch them because they may burn.
Remove from oven, let cool. Then serve. 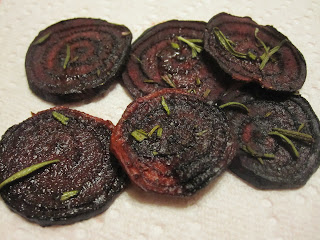 As I mentioned above, I need to invest in a better mandolin (mine is on the side of a box grater, which made it difficult to properly slice the beets), so some of the beet ships were too thick and didn't cook properly. However, the ones that were crispy (and even the ones which were not) were full of flavor, perfectly seasoned and a wonderful snack.