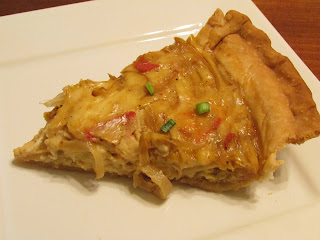 It's almost Saint Patrick's Day again. I can't believe it's almost the middle of March again, it's crazy how fast time flies. I have just a small three recipe series for St. Patrick's Day this year, typically I make several desserts, however, this year I have three savory recipes. This first one is a nice savory quiche which is best served as dinner.


Cook the soy bacon in a skillet over medium heat until crispy and set aside on paper towels.
Add the onions and saute until tender, about 5-7 minutes. Add 1/4 cup Guinness and simmer until the liquid has mostly evaporated, about 15 minutes and repeat. Remove from heat and mix in the grainy mustard and soy sauce and place in a large bowl.

Crumble in the soy bacon, cream, eggs and 1/2 of the cheese and season with cayenne, salt and pepper. Pour the mixture in to the pie crust and top with the remaining cheese.

Bake in a preheated 375F oven until golden brown on top and set in the center, about 25-30 minutes.


This recipe turned out wonderful. The onions had great flavor (and I'm not a beer lover), you'll have a little beer left in the can. Dave was happy to take care of the rest of ours. The soy bacon added a little bit of a crunch and the Guinness and cheddar went well together.