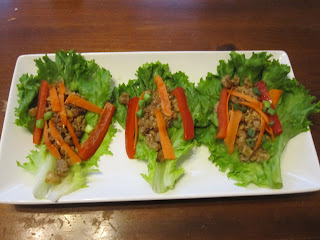 I've been foraying into vegan recipes a little bit more, just because they're lower calorie than some vegetarian recipes. I found this recipe while looking for a stir-fry recipe and thought it would be interesting to create a "meat" type base out of walnuts. However, I didn't serve this as a meal, but just as a starter along with the recipe which I'll post tomorrow.

Adapted from Jessica in the Kitchen.

To create the "meat", boil the walnuts for 10-15 minutes. You want them to be soft enough to be pliable, but still a little crunchy. After draining the water, I used a rolling pin to pound out the walnuts. Then I added them to a small bowl and mixed them with the soy sauce, ginger and garlic.

To build the lettuce wraps, divide the walnut meat among each of the three lettuce leaves.


Top each with some sliced red pepper and shredded carrot. In a small bowl mix together the maple syrup and the sriracha sauce. Drizzle over the lettuce wraps. 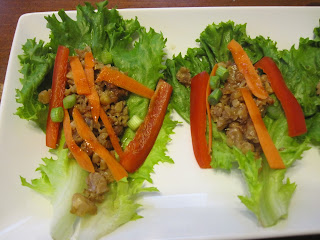 I thought this was a really interesting recipe, the walnuts were surprisingly full of flavor, boiling the walnuts to soften them allowed for the walnuts to really absorb the soy sauce, ginger and garlic flavors. The carrots, red pepper and green onions added a nice fresh element and additional crunch, while the sauce was sweet with a hint of spiciness.