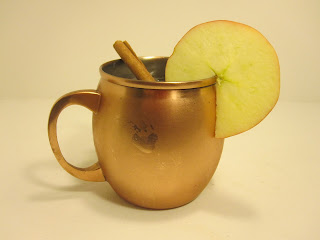 Moscow Mules are one of my favorite favorite cocktails to order at restaurants. When I found these copper mugs at Target, I knew that the options for the blog would be endless. This version doesn't involve the usual vodka, but rather hard cider in order to invoke a fall-like feel.


First chill your copper mugs in the freezer. Once the mugs have chilled for a few hours, fill them with ice and add the hard apple cider and nonalcoholic ginger beer. Stir to distribute the ingredients and then garnish with the apple slices and cinnamon sticks.


This isn't a very alcoholic drink, the hard cider is a lot lighter than vodka, but overall it was nice and refreshing. I even made a non-alcoholic version for my youngest brother using apple cider instead of hard apple cider. The combination of the apple and ginger beer is nice and crisp, like a fresh picked apple.