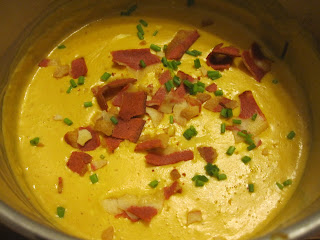 I've been trying more recipes from Food Network lately, because they have been putting out really creative autumn recipes. I would never have thought to incorporate both hard cider and pumpkin puree into a fondue recipe, but it's such an awesome concept for fall.

Melt the butter in a medium saucepan over medium heat. Whisk in the flour and garlic; cook, stirring, until incorporated, about 2 minutes. Whisk in the hard cider, pumpkin puree, mustard, soy sauce, 1/2 teaspoon salt, and cayenne until smooth. Bring to a simmer and cook, stirring occasionally, until thickened, about 3 minutes.

Gradually whisk in the nuefchatel cheese and cheddar until melted and smooth, about 2 minutes. Transfer the dip to a bowl; top with the vegan bacon and chives. 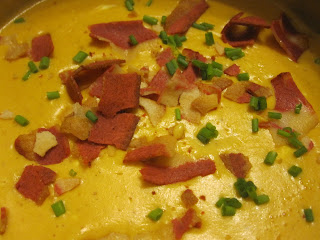 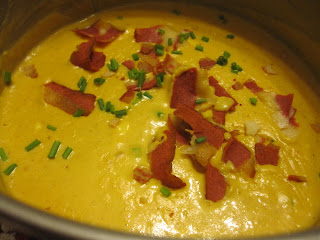 The flavor mix in this fondue was very interesting. The hard cider and pumpkin were both background flavor notes, but over all very apparent in the recipe. The cheddar cheese and vegan bacon are what you'll taste the most. I served ciabatta bread alongside this fondue, but it would be good with apples also.