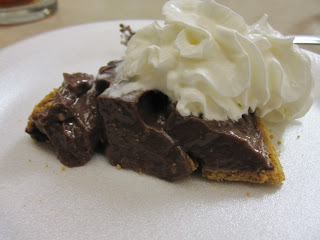 Last night was the Thanksgiving Dinner party at J.'s. It was a great time with a lot of fun people and delicious food. Here's the easy dessert recipe that I made for last night's party.

Bake the graham cracker crust for 5 minutes at 350.

Heat milk according to the pudding directions. Mine was 3 1/2 cups of milk for two packages of pudding.

Stirring the pudding constantly bring it to a boil.

Remove from the heat once the mixture is boiling. Let sit five minutes, stir.

Pour into the graham cracker crust.

Cover with plastic wrap (make sure the wrap is touching the pudding or it will get a film on top).

Refrigerate for several hours until the pudding is set.


I'm not big on pumpkin or apple pie so this pie is the perfect holiday pie for me because it's a flavor that everyone likes and it's so easy to make. Make this first, then you can do so many other things while it refrigerates.