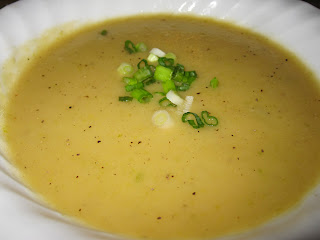 I found this recipe in the October 2012 issue of Vegetarian Times magazine. You can find it on page 32.

The only change I made was adding green onions as a garnish rather than chives because I had the green onions on hand.

I first had potato-leek soup in England you can find pictures of that food adventure here.


This soup was velvety smooth and so flavorful. My dad hates onions, but thought that the leek flavor was much milder than a typical onion. It was even a hit with J., he went back for seconds. Just like the soup I had in Clithroe, England at the Inn at Whitewall this soup had a smooth, velvety texture and is perfectly filling for fall/winter.

One warning, this recipe didn't make nearly enough, if you have a larger crowd or you'd like to have leftovers double the recipe.