Mac and Cheese with Caramelized Onions and Bacon 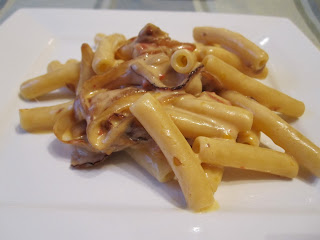 Often when J and I make dinner I let him choose the recipe, I was not surprised when he chose this recipe. Bacon + mac and cheese, this is a recipe that any man would love. Of course I swapped vegan bacon out for the pork bacon, but I think that it's growing on J, he even asks that I make it for breakfast. This recipe was ready in about half an hour, also a serious plus.

When the onions have about ten minutes left, start heating the vegan bacon until crispy. Also, boil a large pot of salted water and cook the ziti according to package directions. Once finished, drain the ziti and pour it back into the pot that it was cooked in.


Remove the bacon from the heat and slice into small pieces. In a saucepan combine the heavy cream, milk, cheddar cheese, salt, cayenne and paprika. Stir until the cheese is melted.


This reminded me of a dish from one of my favorite restaurants. The Chocolate Bar sells a build-your-own mac and cheese and I always order mine with caramelized onions and roasted red peppers. The caramelized onions in this dish were as good as those from the restaurant. Deglazing the pan with the balsamic vinegar added a nice depth of flavor to the caramelized onions. The saltiness from the bacon went well with all of the other ingredients and the paprika/cayenne pepper added a nice heat. We had no leftovers, that's always a good sign in our house.