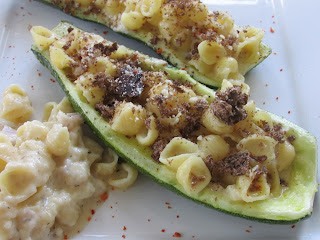 Zucchini is one of those bountiful garden vegetables that you probably have too many of. I am a big proponent of fried zucchini -- something about that just screams summertime to me, but I digress, there are other ways to eat zucchini.

I saw this recipe in Food Network magazine along with several other recipes for stuffed zucchini.

Slice the zucchini in half and scoop out the center leaving a 3/4 thick shell. Brush both sides with olive oil and broil until soft. A few minutes per side. 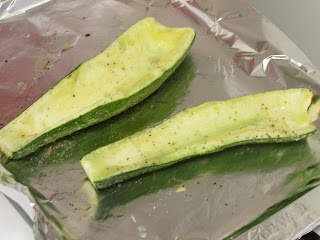 Meanwhile, cook the pasta according to package directions, drain and set aside once finished.

In a skillet heat the remaining 1 tablespoon olive oil over medium heat. Add the shallot and cook, about one minute. Add the heavy cream and vegetable broth, bring to a simmer and cook five to six minutes, the mixture should thicken slightly. Add the havarti, salt and pepper. Stir until the cheese melts.

Remove from the heat and stir in the pasta.  Fill the zucchini halves with the pasta mixture and sprinkle breadcrumbs and lemon zest. Return to the broiler for about a minute or until golden brown. 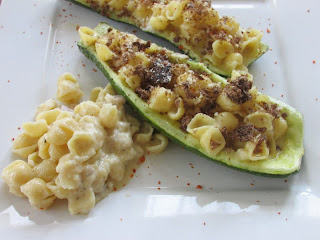 This recipe turned out great. There was extra macaroni and cheese on the side which was fine with me. The lemon pasta had good flavor, I had not used havarti before, it made the sauce nice and creamy. The lemon flavor was present, but not overwhelming and it all paired well with the zucchini boat.