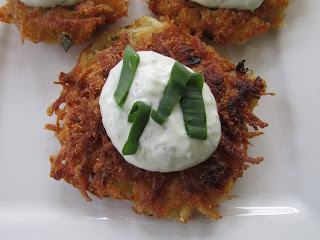 When Dave and I first started dating we tried out a latke recipe together. This one is a basic latke, but the yogurt sauce is what makes it shine. The yogurt is full of flavor and even though it has jalapeno in it, the sauce isn't too spicy.

Recipe from A Spicy Perspective.

First add all potatoes to a colander and press down to extract the excess moisture -- you do not want them to be full of water.

After pressing the potatoes, mix together the potatoes, scallions, eggs, cornmeal, salt and pepper. Heat the oil in a hot skillet and then form the latkes into patties. 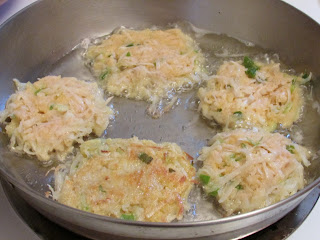 Fry until golden brown on each side, salt each once cooked. 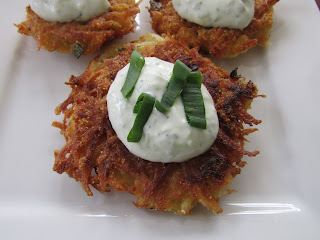 The latkes were nice and crispy. Adding the green onion brought an additional dimension of flavor. Dave said that he could taste the cornmeal in them, but I couldn't. The jalapeno dill yogurt was full of flavor, even though it had the jalapeno mixed in, the sauce overall had a nice cooling effect with the latkes.