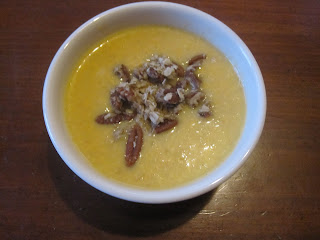 Soup season is upon us (maybe). The temperatures here have ranged from unseasonably warm to downright uncomfortably cold. This soup is easy to make, the crumble add a little something extra, however, it was ridiculously good mixed into yogurt for breakfast. By virtue of that I recommend making the full crumble for the soup and then saving the leftovers for soup.

In a greased 8x8  add the oats, pecans, flour, brown sugar, cinnamon and salt. Using your fingers mix in the softened butter to form a crumble until everything is moist and the butter is evenly distributed. Bake for 20-25 minutes. I made this while the soup was cooking.
Heat olive oil in large soup pot over medium heat. Once hot, add the onions and a pinch of brown sugar. Season with a little salt and pepper. Cook about 5 minutes, stirring frequently, until the onions are softened. At this point, slowly add in the apple cider 1/3 cup at a time, let it cook into the onions, add more and continue to cook. Add the apples to the pot and cook over medium heat, stirring, until softened, 8 minutes. Add in any remaining apple cider, the beer, vegetable broth and cayenne. Bring to a simmer and cook 5-10 minutes or until the apples are tender.

Whisk the milk and flour together until smooth. Using an immersion blender puree until smooth.
Return to the stove and bring to a boil. Stir in the milk + flour mixture.

Stir in the cheddar cheese until smooth. Add the brie cheese and stir until melted. Serve topped with the crumble. 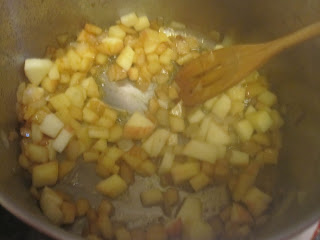 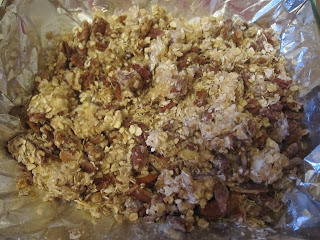 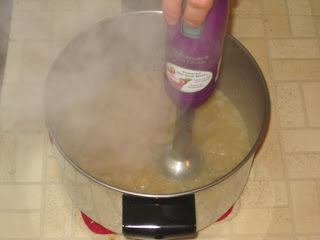 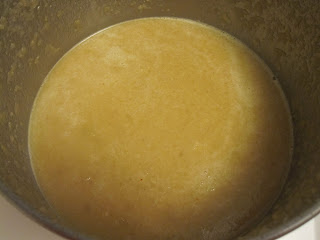 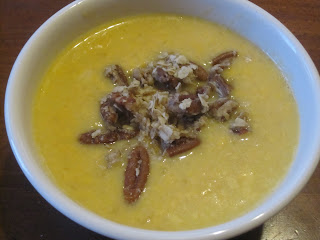 This was one of those recipes that Dave and I had mixed feelings about. It was good, but I don't know if I would want to make it again. I really like brie, but I think it got a little lost in the mix of ingredients. I really enjoyed the cheddar + beer + apple combo though.