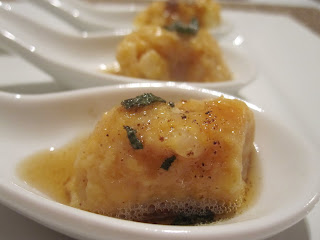 A continued effort to use pureed pumpkin, for fun, in food that isn't pie, try this pumpkin gnocchi. We weren't too hungry for this because I cooked them too late at night, hence the tasting portions; still, these gnocchi were gone in seconds - we liked them, and now we have a couple lunch portions for next week.

Recipe from the Food Network.

Peel all potatoes and cut into chunks. Boil the potatoes, remove and mash as well as possible, then set aside to cool. I'm not sure, but if it's too warm it might interact with some of the other dough ingredients prematurely.

Set another pot of water on to boil, and prepare a floured surface, I used waxed paper. To the potatoes add pumpkin, cheese, the egg, cinnamon, nutmeg, salt and pepper and mix. Into this mixture work divided quantities of the flour until it is the proper consistency. The desire is for a workable dough that's not too dense or sticky.

On your surface, split the dough into segments. Each segment press and roll out into a log, roughly one inch thick.

Using a fork make tine marks on the dough, I think for visual effect, and cut into inch pieces. Plonk them into the boiling water, once they rise, they are just about done.

While the gnocchi boil, start to heat the butter in a skillet. It will melt and start to bubble, then brown. When it is hot and bubbly, add the chopped sage. After it gets browned, remove from heat and top a portion of gnocchi.


We didn't make as much browned butter as the recipe calls for, it's some ridiculous two sticks of butter that goes over all the gnocchi. Thanks, Emeril, but no. We'll just make it in smaller portions. 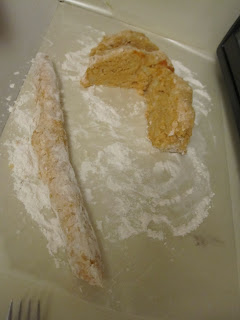 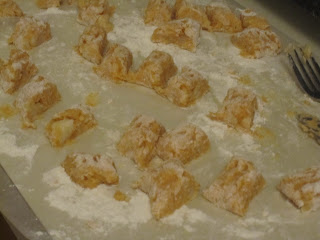 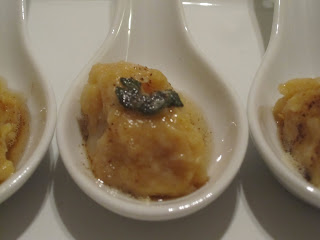 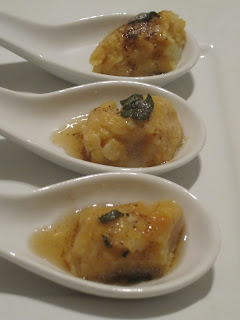 The gnocchi were a perfectly satisfying taste of pumpkin and potato, sage and browned butter. We also prefer when pumpkin is used in a savory way, like this, rather than always so sweet.