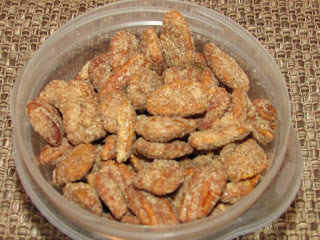 I have been making more recipes in the slow cooker this month than I usually do, so hopefully other people have been using their slow cookers a little extra as well. I made this sweet snack while studying for finals, although it is a slow cooker recipe, it does require a little work, but the results are amazing. This made a little more than I thought it would so I took the leftovers to work, my coworkers loved it.

Add the cinnamon sugar mixture to pecans and stir to make sure the pecans are evenly coated.

Cook on low for 3-4 hours, stir every 20 minutes, making sure everything is coated

Line a baking sheet with parchment paper and spread pecans on the paper to cool.

These are crunchy and just the right amount of sweet. I enjoyed the sugar glaze that settled on the pecans and the cinnamon added a nice touch. Stirring them every twenty minutes wasn't awful, but it does take more work than most other slow cooker recipes. Overall these were a hit.