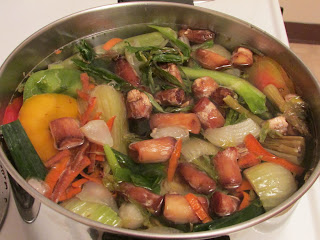 We make dinner at least five nights a week depending on our class schedules. I was throwing out so many vegetable scraps, which was frustrating because whatever you're not using is wasted money. I finally came up with the idea to make homemade vegetable broth. We froze all of the scraps in freezer bags until we thought we had enough.

This recipe made 16 cups of vegetable broth which will be very helpful throughout the Soup Wednesday series. The broth will store in the fridge for a few days, but otherwise can be portioned into freezer bags and frozen until needed.

There isn't much of an ingredients use here's what I used: carrot peels, mushroom stems, the green part of leeks, scraps of celery, onion and tomato. I also threw in some sage stems.

Add 20 cup of water to a soup pot with all of the vegetable scraps. Bring to a boil and then reduce to a simmer. Simmer for two hours.

Remove from the heat and let cool a little, strain through a fine mesh sieve. The portion. I split mine into four cup portions and froze three bags, the other portion was used in the recipe I have for tomorrow.