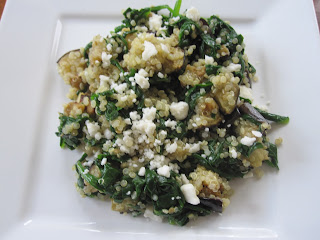 I've been making an effort to try to incorporate some recipes which have been on my Pinterest board for quite a while. This pin was intriguing to me, but sat for quite a while at the bottom of my Recipes to Try Board. I'm really glad that we put this together for a quick afternoon lunch.


Preheat oven to 400 F. Grease a foil lined baking sheet and spread the chopped eggplant onto baking sheet. drizzle with olive oil and season with salt and pepper. Roast for 20-25 minutes, or until eggplant softens. Midway through roasting, shake the pan to help redistribute the eggplant

While eggplant is being roasted, heat 1 tablespoon of olive oil in a large skillet, add spinach and 1 minced garlic clove and cook for a couple of minutes, constantly stirring, just until spinach wilts. Remove from heat.

Once eggplant is done, immediately remove it from the baking sheet and add it into the same skillet with spinach, off heat. Then add the quinoa and another clove of minced garlic. Mix everything together to combine. 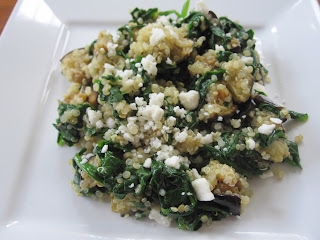 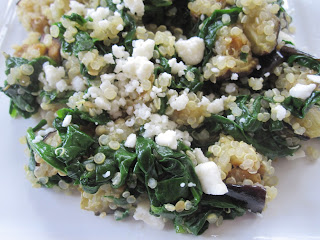 The eggplant in this dish roasted quite nicely, which helped to remove some of the bitter flavor that eggplant sometimes can have. Make sure not to put too much salt on the eggplant, because the feta cheese will be quite salty and you don't want to overpower the dish with salt. The spinach and the eggplant paired well with the quinoa, which is pretty bland on it's own, while the feta added a nice salty element.