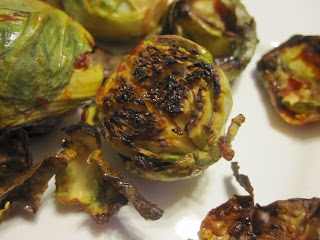 When Dave and I traveled to New York in March we stayed with one of his best friends from high school (Matt) and his wife (Sara). On our first night in town they took us to one of their favorite restaurants in Connecticut a tapas bar called Barcelona. Dave and I love tapas restaurants, I'm sad that there are none near us. For those of you who are unfamiliar with tapas, tapas are small plates and they're usually cheaply priced. To create a meal you order several plates for yourself or several to share with someone else or even the whole table.

At Barcelona, Dave and I split five tapas (I wish I had taken pictures, the food was amazing), one of those tapas was Brussels sprouts which had been roasted with a garlic chili sauce. the sauce had been painted on thick and the Brussels were cross-hatched to allow the sauce to seep into the center. We decided that we should try to recreate the dish since it seemed to be one of the least complicated.

Inspired by Barcelona in Greenwich, CT.

*I purchased some pre-made garlic chili sauce from the Asian aisle of my grocery store -- beware, it really packs a punch.


First, wash the Brussels sprouts and discard the first few outer leaves of each. once that is done carefully carve an X into the top of each Brussels sprout with a paring knife.

Toss the Brussels sprouts with the oil and garlic chili sauce to coat.

Roast at 400 for 20-30 minutes or until the Brussels sprouts are crisping up. 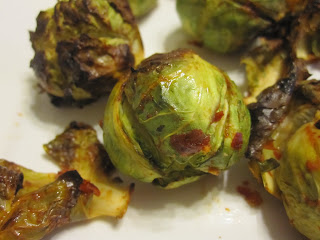 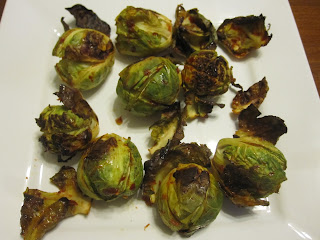 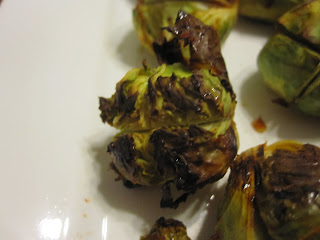 These ended up being not quite the same, I guess we'll just need to experiment a little more in the future. The original Brussels were totally coated in the sauce, I think that it might have been brushed on and that they had not been tossed in the sauce. Our sauce wasn't too thick, but the sauce on the Brussels at the restaurant was pretty thick. The biggest difference was the heat level, this pre-made garlic chili sauce is not for the faint of heart, the ones we had at Barcelona were more of a sweet heat.

This recipe was good, but it was way too spicy for me and not exactly what I was looking for, I'll have to try to develop my own chili garlic sauce before I try to replicate it again.