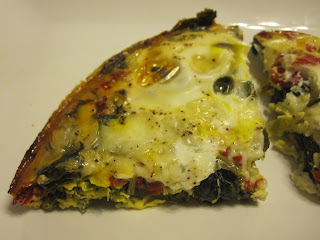 This recipe is another that has been on my Pinterest board for a while. I thought the idea of making a frittata in the slow cooker was interesting, however, I don't think this is necessarily suited for breakfast since it takes 2-3 hours for the frittata to cook. It could probably be served at brunch, or like we served it, as breakfast for dinner.

Saute the kale to wilt it down and then spread it out in the bottom of a large slow cooker that has been sprayed with cooking spray.

Add the chopped red pepper, sliced green onion and diced white cheddar to the slow cooker with the kale. Beat the eggs well,and pour over other ingredients in the slow cooker, and stir so all ingredients are well-combined. Season with any all-purpose seasoning that you like to use, and add some pepper as well.

Cook on low for 2 - 3 hours, or until the frittata is well set and cheese is melted. Cut into pieces and serve hot. 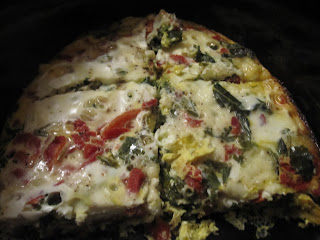 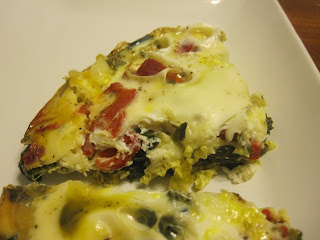 This got mixed reviews. I really liked the idea of this recipe, but I don't know if I liked how it turned out. Even though it was full of ingredients that I enjoy, I just though the recipe was lacking something. Maybe it would have been better if I had served it with the suggested sour cream. Dave didn't seem to have a problem with it, he ended up eating all of he leftovers.