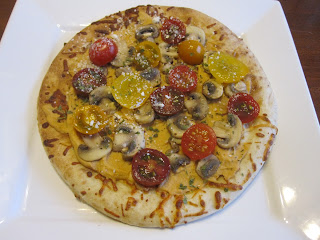 This recipe was in a magazine article titled "How to Go Vegetarian." The article used several recipes to show how your traditional meals could be "upgraded" to a vegetarian version. The only recipe which stood out to me was this pizza recipe, I thought it was a very interesting concept to use hummus as the base for the pizza toppings.

Recipe adapted from the book Pure Food by Veronica Bosgraaf, originally read in Us Weekly.

To make the pizza, cook the pizza crust according to package directions (mine needed to be baked in the oven for several minutes). Once the crust has baked, divide the hummus between both pizza crusts and spread it evenly onto the crust. Top the hummus with the sliced tomatoes, sauteed mushroom slices, a pinch of parsley and a pinch of parmesan cheese. Slice and then serve. 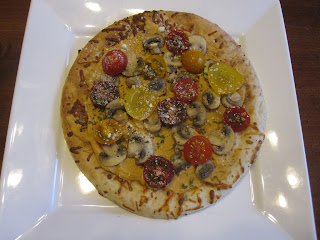 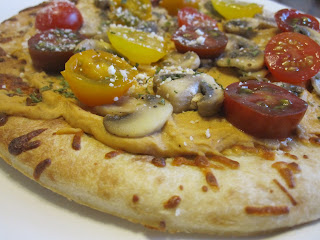 Dave and I enjoyed this recipe so much that we picked up extra pizza crust at the store the next day to make it again with the remaining ingredients that we had. I think the chipotle pepper hummus really helped to make this such a great recipe -- it really brought good heat to the dish while not being overwhelmingly spicy. The tomatoes and mushrooms paired well together and with the hummus.