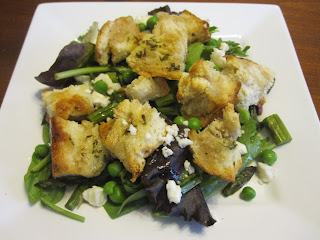 Recipe from Two Peas and Their Pod.

On another baking sheet spread the asparagus pieces out in a single layer and drizzle with olive oil. Toss until well coated. Season the bread cubes and asparagus with salt and black pepper, to taste. Place baking sheets in the oven and bake at 400 degrees for 30-35 minutes. Make sure to stir both one or two times while they are baking. Once the bread cubes and asparagus are finished baking, remove from the oven and let cool.

Next, make the dressing, by combining olive oil, lemon juice, balsamic vinegar, honey, and garlic. Whisk until combined. Season with salt and black pepper, to taste.

After that, combine the bread cubes, asparagus, mixed greens, peas, and feta cheese. Portion onto plates and serve with as much or as little lemon dressing as you'd like. 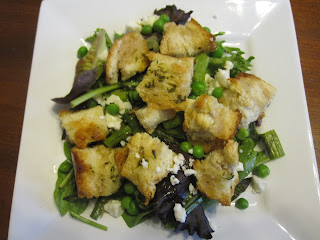 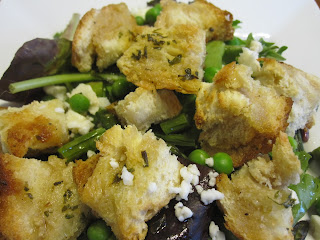 This panzanella had wonderful flavor. The bread cubes really soaked up the butter and herbs and took on a the flavor of both during the baking process. The roasted asparagus and peas added a nice hint of spring to the dish. The lemon dressing and feta cheese added some nice contrasting flavor. Overall, I was happy with this dish, as was Dave. It didn't take us too long to eat all of the leftovers.