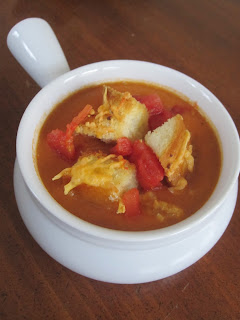 I found this recipe in Food Network magazine a few months ago. We needed to make some adaptations based on what we had -- and the fact that tomatoes are ridiculously expensive now that it's winter. I can't bring myself to pay so much for tomatoes, so rather than using off the vine tomatoes, I substituted canned tomatoes.


Heat 1 tablespoon olive oil in a large pot over medium-high heat. Add the onion, 3 garlic cloves and a pinch of salt. Cook, stirring occasionally, until the onion is softened.  Add all but 1/2 cup of the diced tomatoes, the beans, broth, 1 cup water, the rosemary sprig, 1/4 teaspoon red pepper flakes and 1/2 teaspoon salt. Bring to a boil. Reduce the heat to medium and simmer 20 minutes.

Discard the rosemary sprig. Remove from the heat and use an immersion blender to puree the soup. Season the soup with salt

Preheat the oven to 400 degrees. Heat the remaining 2 tablespoons olive oil and 2 garlic cloves in a small skillet over medium heat. Cook, stirring occasionally, until lightly browned, 5 minutes. Toss with the bread, cheddar and a pinch each of salt and red pepper flakes on a baking sheet. Bake, stirring occasionally, until the croutons are golden, 10 minutes. Top each bowl of soup with the croutons and the reserved 1/2 cup chopped tomatoes. 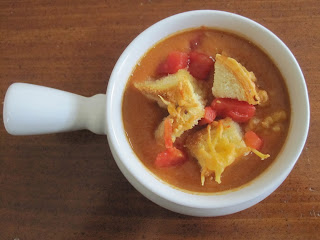 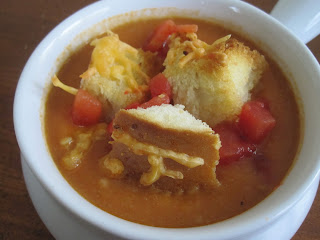 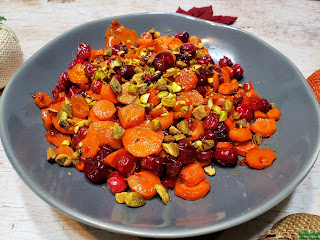