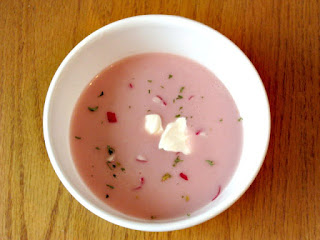 This recipe comes from Vegetarian Times magazine and can be found in the April/May 2013 issue on p. 64. I was drawn to this recipe because of the color of the soup, I like radishes in my salad, but I've never had them on anything else before. The recipe in the magazine called for crème fraîche instead of sour cream, but I couldn't find any crème fraîche in the grocery store and I already had all of the ingredients that I needed to purchase. I don't think the sour cream detracted from the soup, you can use either.


I was a little disappointed in this soup -- it wasn't bad but it was a little flavorless. If you're looking to make this soup I would recommend adding a little garlic into the soup with the onion, or perhaps subbing a little vegetable broth for part of the water. The soup is meant to be a pretty pink so you don't want to ruin that by putting in too much broth, but I think a little broth or a vegetable bouillon cube would let the color to still shine through.