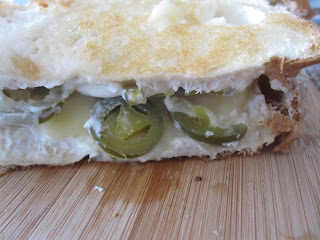 I'm surprised that the sinful goodness that is this sandwich hasn't made the list yet. I heard a trick on the radio about spreading a thin layer of mayo on the outside of grilled cheese instead of butter. The claim was that it makes the sandwich incredibly crispy without a mayo taste. I don't use mayo, but I had Miracle Whip, so I decided to test that theory out on this sandwich.

Build you sandwich by spreading the neufchatel cheese on whatever sides of the bread you intend to be the inside of the grilled cheese. Top the neufchatel with shredded white cheddar cheese and as many pickled jalapenos as you'd like -- I just made a single layer covering the entire sandwich. Lightly spread  mayo or Miracle Whip on the outside of the sandwich and then cook in a hot skillet until the outsides are crisp and the cheese is melted. 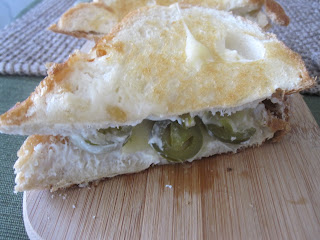 I was impressed with how well using Miracle Whip on the outside of the sandwich worked -- it really did make for a crispy crust that only tasted slightly like Miracle Whip. Mayo is a much more neutral flavor and would likely result in a 100% success with that technique. This tasted exactly like you would want, just bundled up in grilled cheese form, I liked using pickled jalapenos because I find them slightly more mild and easier to handle since they're pre-sliced, but fresh jalaps would work well too.