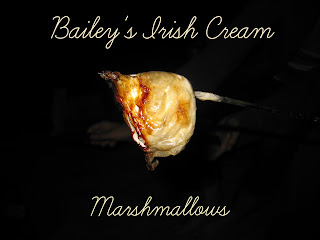 I've seen this pinned on Pinterest several places, but there's really no recipe so I just went for it. Enjoy a bonfire and impress your friends with a new way to make s'mores. These are delicious alone, but they are incredibly delicious in a s'more.

These were so good! The marshmallow will bubble up and caramelize due to the alcohol in the Bailey's so on top of marshmallow goodness and Bailey's flavor there is also a slight hint of caramel. This is such a simple way to make fall bonfires an extra special time.

Every once in a while someone stops by and points out to me that marshmallows aren't "vegetarian". I would like to direct you to a really great discussion on the "gray areas" of vegetarianism/veganism over at The Tipping Point. In the meantime, I will continue to enjoy the occasional marshmallow or Guinness filled cupcake, because I am not vegan. Cheers!