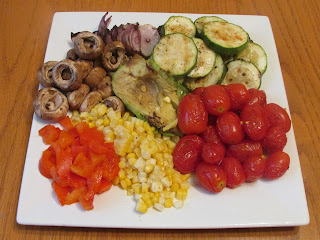 One of the greatest things to grill is vegetables. I like showing you a wide variety of grilling alternatives during Grilling Wednesday, but sometimes it's best to go back to basics. These tacos are made with fresh vegetables grilled to perfection.

1.) Make the taco seasoning -- mix together the cumin, red pepper and onion powder to taste. You'll want quite a bit of each because it goes on all of the vegetables. I just guessed the measurements in a small bowl.

2.) Slice the avocado in half, leave the bell pepper whole, slice the zucchini into discs, skewer the tomatoes, mushrooms and red onion. Coat all of these vegetables in oil and season with the homemade taco seasoning.

In all of the photos you'll see that we left the corn bare, I don't recommend doing that, it was a pain. Coat the corn in oil, season it, then loosely wrap it in foil -- cook 4-5 minutes rotating several times until the corn is golden brown on all parts.

3.) Grill the tomatoes until bursting, the red onion, mushrooms and zucchini until browning. The avocado will cook until grill marks form. Overall this process took about 20 minutes. 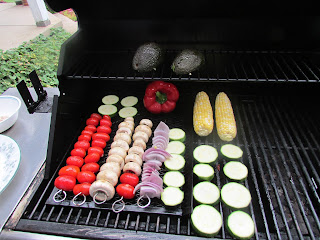 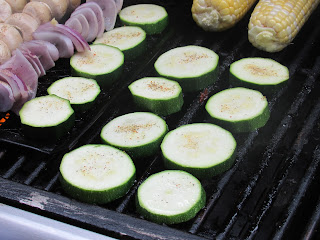 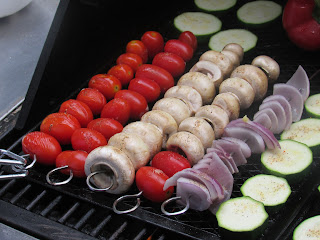 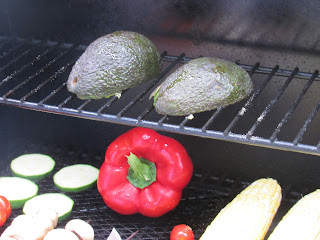 5.) Serve in warmed tortillas with cheese and sour cream if desired.

These were perfection. Everyone in my family enjoyed them. Grilling brought out the best flavors in all of the vegetables -- but especially in the corn and mushrooms. When we ate them for dinner they were served with cheese. I reheated these leftovers for lunch at work the next day and just ate the tacos plain and they were just as good as the night before.