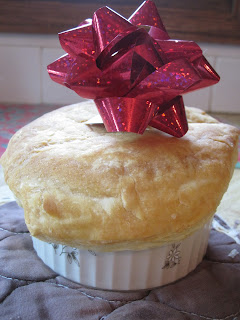 Today's recipe is reminiscent of a dish that I had in a pub in England.


To see other foods I had in England check out this blog.

And you can find my remakes of some of those foods: watercress pesto crostinis, cheese and onion pie, halloumi kabobs, grilled red pepper and onion sandwiches, potato-leek soup.

This recipe is incredibly easy to make and has a great presentation.

This recipe wasn't exactly like the one I had in England because that one had some sort of a sauce served with it, but overall it was great. I used four green onions in the original recipe and scaled that back to make the recipe taste less like onion. I couldn't tell that there was goat cheese in the recipe though, I put several ounces into the recipe. Overall this was a good recipe and I would love to make it again because it was a hit with everyone.