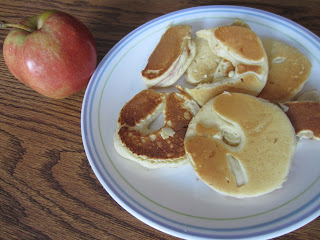 I saw a picture of apple rings on Pinterest a few weeks ago and it sounded like a really good idea, but unfortunately there was no link connected to it. So I just tried to make something that looked similar. This turned out to be like a pancake with an apple slice in the middle. It was something extra than just apple flavored pancakes or cut up apple chunks inside, because it had a little bit of apple texture and crunch inside the pancake.

Ingredients:
-pancake mix + eggs or milk that are required by the mix
-about 4 apples would use all the pancake batter, my pancake batter said it would make 14 pancakes 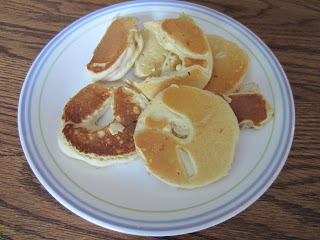 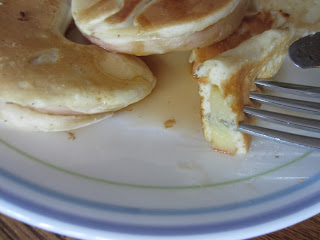 I just picked these up and ate them plain and they were really good that way. I also ate some with a fork and syrup, which were also good. I thought this was a successful recipe overall.

I tried to do this at first with just apple slices, but those did not turn out as well. The pancake part turned out thicker and was harder to cook, a lot of the inside was not cooked, and the pancake part slipped off the apple because it didn't make a sealed pancake like the rings did. The apple slices were a little too thick to eat easily too, but the rings turned out much better.