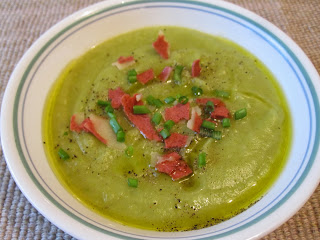 I hope everyone had a great Thanksgiving! Mine was crazy, I picked up a seasonal job to make some extra money and it was insanity. Working retail is something I have never done before and starting on Black Friday was quite the experience. Today I'm making the two hour trip to see J's family for Thankgiving. Wish me luck!

Make sure to clean the leeks well because they are sandy and no one wants sand in their soup!

Heat the oil in a large pot, saute the onion and leeks until soft. Add the asparagus and potatoes and cook for about 8 minutes. Add the broth and crushed red pepper, simmer for 15 minutes or until the potatoes are soft. Using an immersion blender, blend until smooth. Top with chives, vegan bacon, and a drizzle of olive oil. 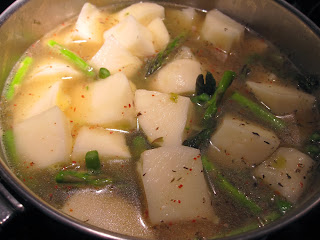 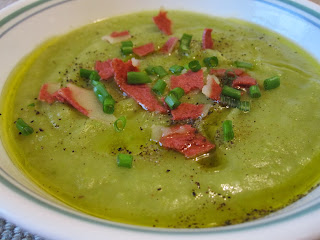 The color of this soup was unfortunate, the original blog had soup that was closer to potato soup in color. Aside from the pea soup color the soup tasted good. The potato was a nice base for the asparagus, the vegan bacon added color and a saltiness. It had the right amount of seasoning. The only issue was that I needed to add more liquid to soup, this soup was too thick to be used for leftovers...it was more the consistency of mashed potatoes. I would make this again though, just with more vegetable broth as a base.