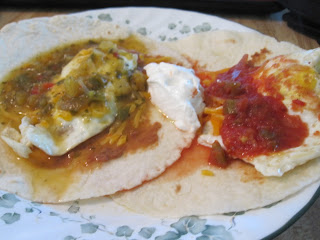 One of the best parts of the cafeteria at the university where I earned my undergraduate degree is the "International" food station which show cases cuisine from a variety of cultures throughout the year and that food station is where I was first introduced to huevos rancheros.

The huevos rancheros I had was made up of a warm tortilla painted with refried beans, an over easy egg on top with cheese. Deliciosa!

Through my research I have discovered that there are a variety of ways to make this dish with a wide variety of ingredients. My personal favorite variation is huevos divorciados (divorced eggs) which is the basic huevos rancheros recipe, but one egg has a red chile sauce and the other a green chile sauce.

My huevos divorciados is quite a bit Americanized by the cheese and sour cream, but easy to make nonetheless. 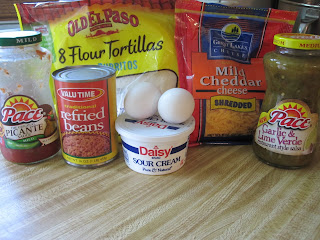 The huevos divorciados was good -- if I made it again I would probably make a traditional huevos rancheros (with just one sauce) because I like the green salsa so much better than the red. I would also leave off the refried beans they didn't really add anything to the dish other than an overpowering garlic flavor (I did buy the cheapest refried beans which probably contributed to that fact). Overall this is a quick and easy breakfast that would be good to make for company because it's a nice twist away from traditional pancakes and eggs.